Native people throughout the world use herbs to accomplish this. One common ceremony is to burn certain herbs, take the smoke in one’s hands and rub or brush it over the body. Today this is commonly called “smudging.” In Western North America the three plants most frequently used in smudging are sage, cedar, and sweetgrass.

There are many varieties of sage, and most have been used in smudging. The botanical name for “true” sage is Salvia (e.g. Salvia officinalis, Garden Sage, or Salvia apiana, White Sage). It is interesting to note that Salvia comes from the Latin root salvare, which means “to heal.” There are also varieties of sage which are of a species separate from Salvin Artemusia. Included here are sagebrush (e.g. Artemisia californica) and mugwort (Artemisia vulgaris). We have seen both Salvia and Artemisia sub-species used in smudging.

Sage is burned in smudging ceremonies to drive out bad spirits, feelings, or influences, and also to keep bad spirits from entering the area where a ceremony takes place. In Plains nations, the floor of the sweat lodge is frequently covered with sage, and participants rub the leaves on their bodies while in the sweat. Sage is also commonly spread on the ground in a lodge or on an altar where the pipe touches the earth. Some nations wrap their pipes in sage when they are placed in pipe-bundles, as sage purifies objects wrapped in it. Sage wreaths are also placed around the head and wrists of Sundancers.

There is some potential confusion here about the terms used to name plants, mainly because in some areas, junipers are known as “cedar” – as in the case of Desert White Cedar (Juniperus monosperina). This doesn’t mean that J. monosperina wasn’t used as a cleansing herb, though; in the Eastern U.S., its relative, Eastern Red Cedar (Juniperus virginia), was used ceremonially. However, in the smudging ceremonies, we have seen or conducted ourselves, Western Red Cedar (Thuja occidentalis) and California Cedar Incense (Libocedrus descurrens) were used … not varieties of juniper.

Cedar is burned while praying either aloud or silently. The prayers rise on the cedar smoke and are carried to the Creator. Cedar is also spread along with sage on the floor of the sweat lodges of some tribes. Cedar branches are brushed in the air to cleanse a home during the House Blessing Ceremony of many Northwest Indian nations. In the Pacific Northwest, the people burn cedar for purification in much the same way as sage – it drives out negative energy, but it also brings in good influences. The spirit of cedar is considered very ancient and wise by Pacific Northwest tribes, and old, downed cedar trees are honoured with offerings and prayers.

One of the most sacred plants for the Plains Indians, sweetgrass is a tall wild grass with reddish bas and perfume-like, musty odour. It grows mainly on the eastern side of the Rockies in Montana and adjacent Alberta, Canada. It also shows up in some small areas of Wyoming and South Dakota. Its botanical name is Hierochloe odorata. Some common names for it are Seneca grass, holy grass and vanilla grass. We have been told that a variety of vanilla grass grows in North Central California. But, how similar it is to the Plains variety we don’t know.

On the Plains, sweetgrass is usually braided together in bunches as a person’s hair is braided, although friends have said they have seen it simply bunched and wrapped in cloth. Either way, it is usually burned by shaving little bits over hot coals or lighting the end and waving it around, letting the smoke spread through the air. This latter method is how we were taught to burn sweetgrass in the sweat lodge – allowing the purifying smoke to get to all parts of the lodge.

We were taught that it was good to burn sweetgrass after the sage or cedar had driven out the bad influences. Sweetgrass brings in the good spirits and good influences. As with cedar, burning sweetgrass while praying sends prayers up to the Creator in the smoke. High Hollow Horn says in The Sacred Pipe “This smoke from the sweetgrass will rise up to you, and will spread throughout the universe. Its fragrance will be known by the winged, the four-leggeds, and the two-leggeds, for we understand that we are all relatives; may all our brothers be tame and not fear us!” Sweetgrass is also put in pipe bundles and medicine bundles along with sage to purify and protect sacred objects.

Sweetgrass is very rare today, its territory severely cut by development, cattle-grazing, and wheat fields – and tradition Indians in the northern Plains are trying to protect the last remaining fields. The best way for most folks to get sweetgrass is to buy it at Native American retail outlets. This gives support to Indians who can help the fields from being depleted.

To do a smudging ceremony, burn the clippings of these herbs (dried), rub your hands in the smoke, and then gather the smoke and bring it into your body, or – rub it onto yourself; especially onto any area, you feel needs spiritual healing. Keep praying all the while that the unseen powers of the plant will cleanse your spirit. Sometimes, one person will smudge another, or a group of people, using hands – or more often a feather – to lightly brush the smoke over the other person(s). We were taught to look for dark spots in a person’s spirit-body. As one California Indian woman told us, she “sees” a person’s spirit-body glowing around them, and where there are “dark or foggy parts,” she brushes the smoke into these “holes in their spirit-body.” This helps to heal the spirit and to “close up” these holes.

Recently we did a “light” house cleansing for a friend. We use the term “light”, for this is a relatively simple ceremony as opposed to some that are more lengthy and complicated. Our friend had some serious emotional and relationship problems, and he felt they had left a heavy and dark atmosphere. First, we prayed together to the Creator and to the spirits for help. We then burned sage, purified ourselves, and took the sage to all the corners, closets, and rooms of the house. We pushed the smoke with our hands to cleanse every bit of space – lingering over dark or cold spots that “felt” uncomfortable.

We used sage first in order to drive out the bad influences. Then we purified ourselves with cedar and, then repeated the cleaning process throughout the house with that. Then sweetgrass was used in the same manner to bring in good influences. All the time we prayed for help in this cleansing. Finally, we took a candle over the whole house and pushed its light into every corner. The People of the Pacific Northwest Coast taught this “lighting-up” of a house to us. We’ve been doing this type of house cleansing for ten years, and it never fails to “clear the air.”

One more note about smudging. It is very popular among many novices to use abalone shells in smudging. There are many Native elders who are pleased to see so many new folds smudging themselves, but – some are concerned that abalone shells are being used when burning the herbs. On the Pacific Northwest Coast, for example, some holy men have said that abalone shells represent Grandmother Ocean and that they should be used in ceremonies with water, not burning.

We know enough Native elders in the Northwest, the Plains, and California who don’t use abalone shells – but instead clay or stone bowls – that we don’t personally feel comfortable using a shell.

In any case, smudging is a ceremony that must be done with care. We are entering into a relationship with the unseen powers of these plants, and with the spirits of the ceremony. As with all good relationships, there has to be respect and honour if the relationship is to work.

–Adrienne Borden is of Chippewa heritage, and Steve Coyote is of Cheyenne background. 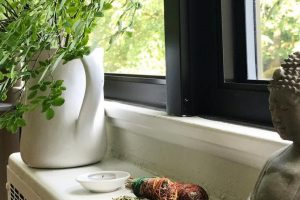 Do You Need To Clear the Negative Energy in Your Home? Here’s How.

A simple test of whether you should clear the energy[...]