The Science of Intention

Recognising the Power behind Our Intentions

The ideas of intention setting, daily affirmations, law of attraction and manifestation, or in the lexicon of the Yoga tradition, ‘Sankalpa’, drive towards the same idea, that if we are clear about what we really want in our lives and take some time on a regular basis to articulate it…we can ‘magic’ it in.

For many people, these ideas are far too rooted in the realms of esoteric traditions. Consequently, they dismiss them before they can even contemplate trying them. However, it’s not really magic at all. Contemporary findings in the burgeoning field of neuroplasticity outline our neurological capacity to change our beliefs, behaviours, and habits.

By drawing together this body of scientific research with how to effectively set an intention, I am endeavouring to start to scratch the surface of why a Sankalpa practice is such an effective transformational tool – and where those changes can be visibly traced in the brain, as well as the body.

The Science behind Sankalpa

Serendipitously, I first started a Sankalpa practice around the same time I encountered the concept of neuroplasticity:

Neuroplasticity simply refers to the fact that the brain is the organ that is built to change in response to experience.

Many of us dismiss intention setting as esoteric, but there is a science behind it.

This explanation comes from psychology and psychiatry Professor, Richard Davidson, the pioneering figurehead in this field. Understanding neuroplasticity was actually what gave me the push to start – and stick with – a Sankalpa practice, as both told me that lasting change was indeed possible.

This is particularly true in Davidson’s latest work and research, as the founder of the Centre for Healthy Minds. Here the research team look at ways to utilise the potentiality of neuroplasticity to induce positive change.

We’re learning we can shape our brains in more adaptive and beneficial ways by cultivating healthy habits of mind…When given a challenging situation your brain hasn’t encountered before, it can reorganise and restructure to respond to that situation. The more often your brain is exposed to that new challenge – like learning a musical instrument, for instance – the more it reorganises and makes that path more established…Our brains are constantly being shaped wittingly or unwittingly – most of the time unwittingly….We’re raising the possibility to intentionally training our brains to improve well-being.

It was during my final year of undergrad, armed with newly acquired knowledge on neuroplasticity and a Yoga Nidra recording, that I decided to take on the overwhelming anxiety that was threatening to make me fail my degree. Having always been a shy child, I assumed that the increasing anxiety I suffered in any potentially stressful situation was just how I was wired. However, the wisdom of neuroplasticity told me that I had the brainpower to re-wire myself – this would involve taking on my thought process, so I turned my attention to my mind and the stories of fear and failure I was telling myself.

Whereas neuroplasticity is neurological – and therefore begins with the brain as an organ, a Sankalpa practice is psychological – pertaining to our complex and intangible mind.

The Sanskrit term is traditionally translated as our existing, motivating, subconscious ‘desires.’ It is, in Freudian psychoanalytic terms, our drive. The desire that is motivating us, residing deep within the unconscious realms of our mind.

The nature of this drive, enhancing or destructive, is born out of our past experiences but is striving for constant satisfaction in the present, thus determining our future action.

In modern-day yoga, the notion of the Sankalpa has been developed into a practice, whereby we consciously set an intention. It takes the form of a simple, positive, present tense statement. By creating a practice centering on this intention or ‘resolve’ – to use the contemporary translation of Sankalpa – the aim is to choose and then change what our driving desire is.

The aim of a Sankalpa practice is to choose and then change what our driving desire is.

This is why a Sankalpa statement is often practised during meditation, as part of a visualization, or in my case a Yoga Nidra practice – the yogic sleep where the statement can be dropped into the subconscious. Effectively, an opportunity that creates a space where we can allow ourselves to really feel that the change already exists within us.

There is a distinct correlation between the basis of neuroplasticity as a means to train our brain and a Sankalpa practice that rests on the idea that we can actively choose and change our motivating drive and desires.

But there is another significant element on which they both agree: the mind-body connection. Neuroplastic research gives evidence of this psycho-physical relationship. In one of Davidson’s aptly titled talk ‘Transform your mind, change your brain: Neuroplasticity and personal transformation’ he uses the phrase ‘the embodied mind’ to encapsulate the idea that our minds and brains are not simply supported by a disembodied architecture, but rather there is bidirectional communication between the brain and the body which provides a mechanism for our minds to influence our bodies in ways that may be consequential for health.

Richard Davidson’s talk on Neuroplasticity and personal transformation.
This is why a successful Sankalpa practice asks that we actually believe our present-tense ‘I am…’ statement, so much so that it is felt in the body. You physically know what it is like in that moment to have that asset in your life. This phenomenon is perhaps the most integral, if not the most challenging part of a Sankalpa practice. However, as Davidson states, it is bidirectional – therefore if the mind is having trouble believing, start with the body.

‘Fake it ’til You Become it’

These words are synonymous with social psychologist Amy Cuddy’s viral 2012 TED Talk ‘Your Body Language Shapes Who You Are’. This is perhaps one of the most known explanations of how to tap into the embodied mind. Cuddy’s research was motivated by the proposition that when you pretend to be powerful, you are more likely to actually feel powerful we know that our minds change our bodies, but is it also true that our bodies change our minds?

Effectively, if you play the part, particularly through body language, of a ‘powerful’ or successful person it is possible to actually influence the body’s physiological processes to line up with this. It appears that another natural consequence of this will be the creation of a new thought pattern or neuroplastic change.

A beautiful thing about Cuddy’s research is its emphasis on the body first, so even if you cannot find that state of belief in your mind you can give it a helping hand by playing the part in your body and behaviour.

‘Power Poses’ makes us feel more confident, despite what our minds may tell us.

I certainly used this trick as I rolled my shoulders back and walked purposefully into the exam hall, even though I had an overwhelming urge to bolt. However, over time, with dedicated practice to feeling confident, the desire to run became quieter as the purposeful walk towards the situation became more natural. It wasn’t until I got really familiar with imagining what my life would feel like if I was free from anxiety during my Sankalpa practice, that I began to get an actual taste of confidence in my day-to-day life. I discovered for myself that it is as much a state of the body, as it is a state of mind.

A Sankalpa practice is far less mysterious than it initially sounds, as placed into a scientific context it is effectively a form of neoplastic training. The aim is to integrate the wishes of the mind into the neurological processes of the brain, which translates to the functioning and feelings in our body and ultimately is seen in the actions and appearances of us as individuals! The transformation can happen from the top (brain/mind) down, or from the bottom (body/behavior) up. So if stating your desire is not working, try flipping it on its head and let the body guide the mind. 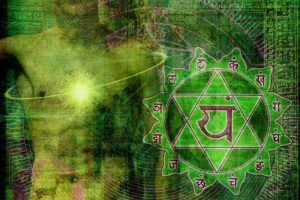 6 Ways to Heal Your Heart Chakra

“When you touch the celestial in your heart, you will[...]